The Last Stand of Captain Pugwart 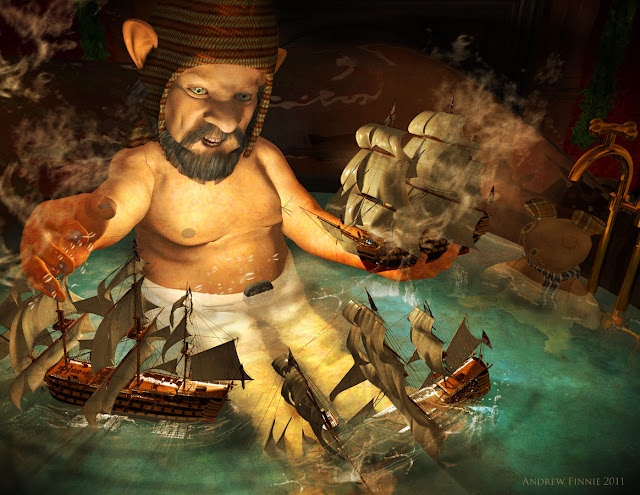 Did I tell  you that I wear vinyl belts now? Unlike leather belts, they stretch - which is good.

Of course, like the pianist Liberace, they go the other way as well .... ie they don't just stretch, but shrink.

To be honest, so far I have not investigated their shrinking properties - though I once read in the Norwegian Adventurer's Handy Hints Guide (April 2009)  that if you leave them  in the freezer for three months they shrink two sizes.

With that tit-bit of information we can conclude (well,  it goes without saying, really)  that, if you go to the North Pole as a Santa Volunteer and happen to have a penchant for vinyl belts, there is small but calculable chance that you will need abdominal amputation if the temperature drops too far - courtesy of the tourniquet effect.

Hmm. Did you ever notice that I type rubbish in my posts? :) 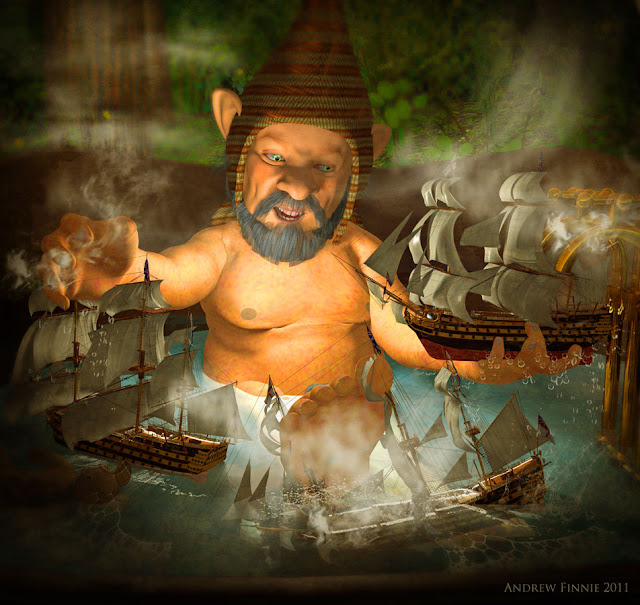 I'm just trying to keep up with my friend Linda - who as a wordsmith has no equal - and types anything but rubbish!

Thank you so much to all my friends for your kind visits this year. It means very much to me. I count myself blessed to have met such a talented, friendly, encouraging, good looking and intelligent bunch of artists with superb taste and style. :)

I sincerely hope you had a WONDERFUL year - and that next year is double good.

I'll be round later and give you all a hug :) Let me know if you have sore ribs or anything like that.


PS: this is for IF's "Sink" - and yes, Elves always wear their pants (and coifs for that matter) in the bath.

Thank you so much for looking.

(Oh if you are reading this before the 19th go here if you would like a free taste of Poser - a program originally designed for artists to pose models without having to talk to real humans.... it comes with a stack of 'models') 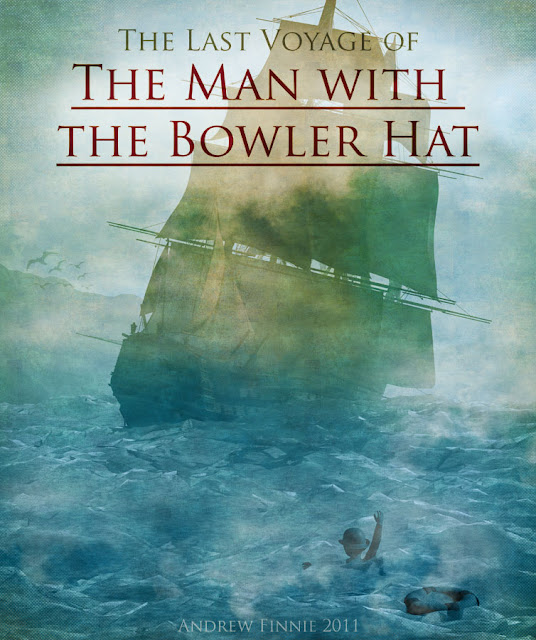 You know that time of night when, tucked away  in bed, you tend to fall asleep with a book suspended by one stiff arm above your face. Regardless of whether your eyes are open or closed, the book hangs like an executioner's axe, threatening to fall and dent your nose or, at the very least, give you a bloody set of lips, should you release your grip for a moment. 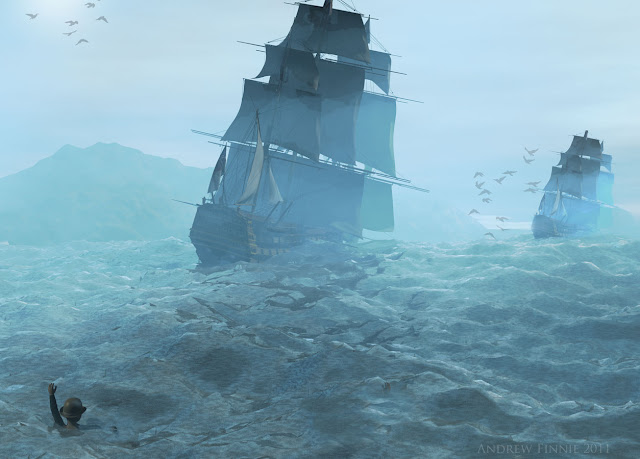 It all goes to prove, without a shadow of a doubt, that it is a dangerous thing to be a reader of books.

I can only thank my lucky stars (read: Bank Manager) that I cannot afford an e-reader - because I fall asleep while reading so often that my nose, already bent like the beak of  the South Australian Yellow Breasted Nosy Noodletwit (genus: eripydies), would have been plastered all over my face by now.

Still, back to the subject at hand, what ever that was...


The greatest thing about The Voyage of The Dawn Treader is its first paragraph. As a 'hook', as an entre, as a 'warmer-upperer', as a piquant sorbet, this paragraph is without equal.

For example, the first line is:

"There was a boy called Eustace Clarence Scrubb, and he almost deserved it." 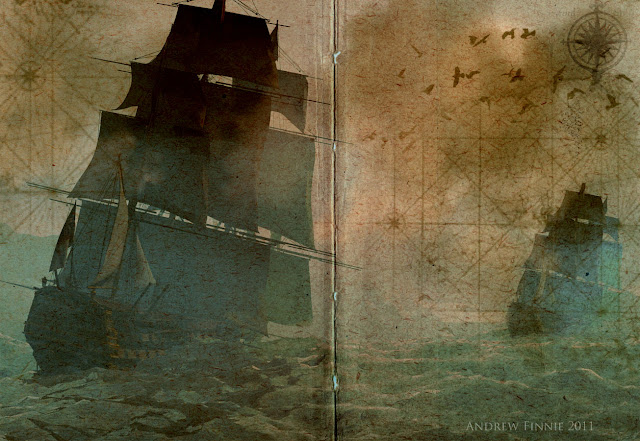 Unfortunately C.S. Lewis must have had an apocolypitic attack of epiliopithy after he wrote the first paragraph, because, without so much as a deeply bated breath, the book soon sinks into the depths of of authorial narrative intervention. (eg: Dear reader, you should not worry yourselves about Eustace, our erstwhile hero, because he is nought but a scoundrel who never changes his socks, even on Sundays.)

Lewis's clumsy interventions are clumsy enough to make us certain that he (Lewis)  is clumsy keen for his  readers not to be hung up by their clumsy suspenders of disbelief.

And the fact that it is written for twelve-year-olds is no excuse for these lapses.

Mind  you, I am older than 12 and I am still reading it, suspenders or not. 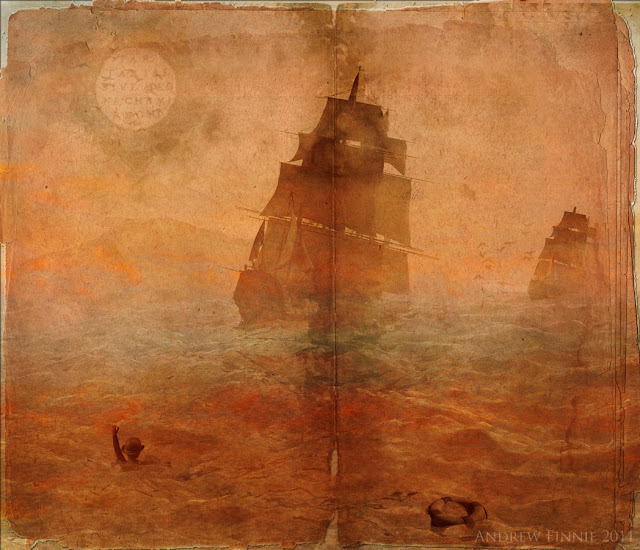 So, the cover of The Voyage of the Dawn Treader is the genesis for this image.

It's also a bow, not only to the cover of Shaun Tan's book The Arrival, but to the techniques of my wonderful artist friends Janne and Mita.

Oh, I almost forgot: this Illustration is for IF's prompt "Separated", a word that I have only recently learnt to misspell. Thank you for looking.

One more thing. Do you need a good laugh? Check out Penspaper Studio. :). Elizabeth has a great sense of humour. 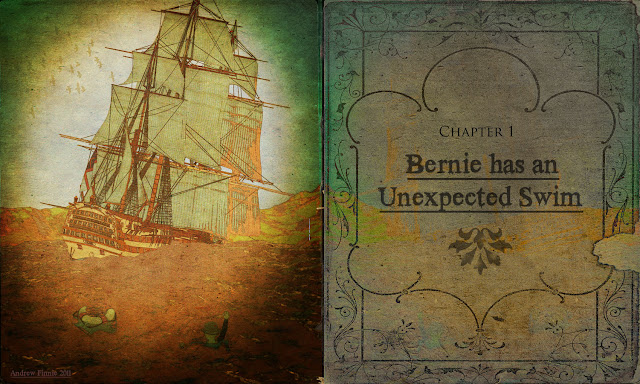 The Sky is Falling

My good friends  Karen and Shirley put me on to the SCBWI challenge about the Sky Is Falling - a story I confess to having never read till two days ago. Very interesting....

If you are doing this challenge please feel free to leave a note. I would love to see your approach.

Of course me not being in the SCBWI could be a problem :) If you are in Oz and a member please let me know what it's like so I can be tempted :)

Thank you for your visit!
18 comments
Labels: Chicken, Chicks, The Fool 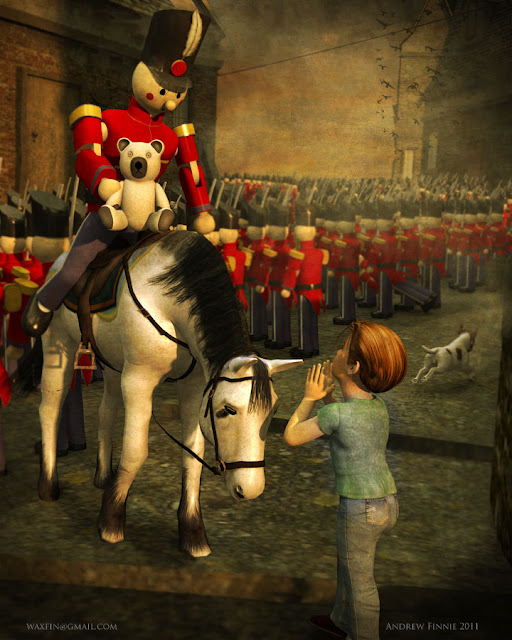 Thank you so much to everyone who checked out my new portfolio site.
And thank you for enjoying hump day and being good sports :)

There are some few people I would still like to visit. I am the tortoise in that Aesop's fable, you know, that one about the dog and the tortoise where the tortoise (named Rhonda)  has a nanny nap ....

So my deepest apologies to you. You know who you are....

Meanwhile I hear Bella Sinclair has some wonderful news :) She rips!
Congratulations Bella !!!

Oh this image is for IF's "Brigade". I gave the colonel a Santa beard and hat, but he looked silly. That's why the dog is running away.

see you and thank you very much for your visit! 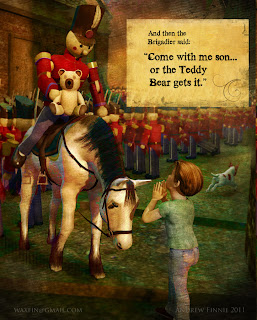